Berlin is a city in which you can eat almost anything you can think of. Besides local cuisine, the city is known for its incredible international offer and for its fantastic value for money. The open-air markets are particularly popular among locals who enjoy visiting and sampling food from various mobile kitchens. For instance, Kreuzberg hosts the so-called Street Food Thursday where you can try whatever you can imagine! However some dishes have the cult status and here are the best Berlin’s bargain bites;

This dish consists of pork sausage which is cut into slices and seasoned with tomato sauce and a curry powder on top. It often gets served with the French fries but you can also opt for a bread instead. The best place to try it is at Curry 36. It’s very popular among locals and there’s a little standing patio area where you can even bring your own drinks. This is an authentic Berlin fast food stall and in my opinion, a must for the first time visitors. They even have a bio currywurst on their menu. The Currywurst museum in Berlin estimates that approximately 70 million currywursts are eaten in Berlin alone every year.

Where to try it

Probably the second most popular choice after currywurst, doner kebab can be found basically anywhere you look. The sliced meat and salad are usually wrapped in a flatbread and you have the choice between different sauces such as hot sauce, garlic sauce or yogurt sauce. Locals swear by Mustafa’s kebab which can be found at Mehringdamm 32. However, the queue here is abnormally long and people sometimes wait for 3 hours to get their order . Curry 36 is in the same street so you can try to get both! Berlin kebabs are usually unbeatable and here are some other great places where you can try this popular dish: 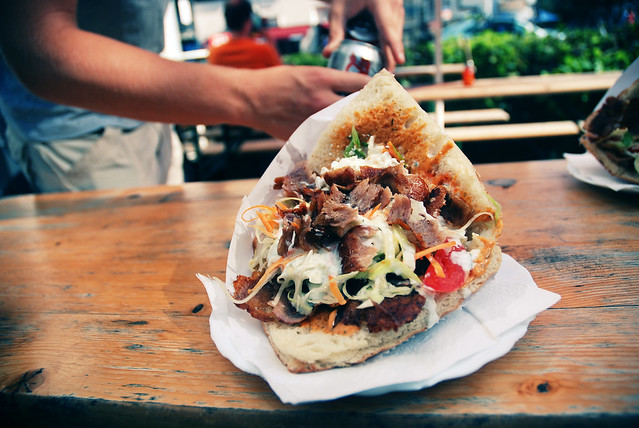 This traditional Middle Eastern dish is another popular fast food option in Berlin. The best places to try it are: 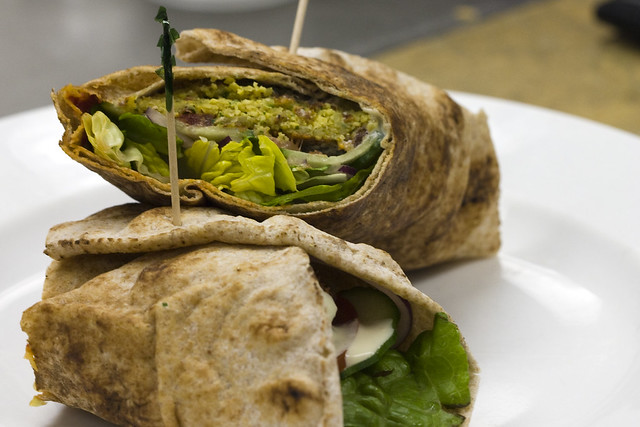 If you’re a fan of the Asian cuisine try this Vietnamese noodle soup which is usually served with beef or chicken. There are many Vietnamese places in Berlin and the great ones are;

Berlin is a great city for vegetarians and vegans and some popular fast food options include veggie burgers, tofu currywurst, organic fries, seitan sausage and more.

Some of the best places are;

With Locals is a website where local people can offer their skills to travelers. This includes preparing authentic and delicious food! I love websites like this because they bring people together through food and experiences and it’s great for socializing when abroad. Berlin chapter has a lot of experiences on offer and a rich selection of different cuisines so I genuinely recommend this website next time you’re in town.

The city has a wide selection of supermarkets, but it seems that Rewe and Edeka are catered mostly towards budget travelers. Talking about Edeka they made an awesome promotional video which went viral and you should totally check it out 🙂

Have any other suggestions? Feel free to comment below.

Belgrade to Budapest by train with Budapest Special

5 Great Destinations In Spain For Travelers and Expats